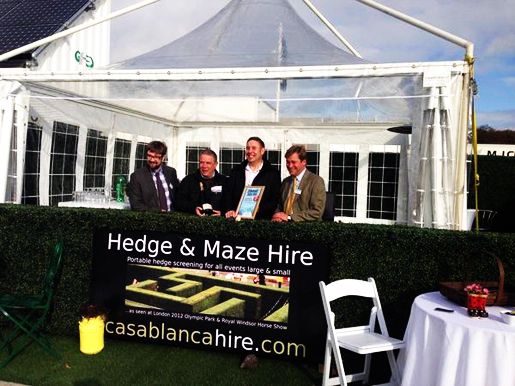 We at CateringHireLondon are proud to have been given this award as we were there to showcase our marquee, hedge and pop-up maze hire to the thousands of people who descended on the event. The Showman’s Show is essentially a meeting place for all those connected to and involved in the events industry, so to be awarded this is a great honour!

The Showman’s Show is organised by Lance Show & Publications Limited and held at Newbury Showground on Wednesday 22nd October and Thursday 23rd October. This year the show boasted more than 350 companies across the two day event.

This was our second year at the show and it was great to see some familiar faces, and some new ones too – there was over a 100 first time exhibitors at the show this year! It’s great to meet new people and see what different companies have to offer as they bring great diversity to an already broad range of companies at the show.

For the second year running our hedges and pop-up mazes were a great crowd pleaser and we were delighted at the number of enquiries made across the two day event. It was great to hear of different plans for both the hedges and the maze at people’s events and we look forward to helping those people out in the not too distant future!

As London’s premier event hire company we were also advising people on what products would be more beneficial to their special occasion and themes, whether it is marquee hire, chair hire, table hire or catering equipment hire, we have a fountain of knowledge to be tapped into.

The Showman’s Show was first established in 1984 and due to high demand it became an annual event in 1989 at Newbury Showground, having roved around the country before settling on Newbury. It has grown year on year and has seen visitors swell to well over 5,000 people across the two days and exhibitors rocket from 34 to over 350.

There was a great range of companies on site this year with exhibitors showcasing practical and functional products, entertainment, sustainable solutions and technology in addition to innovative and exclusive products which are new to the events market.

A new feature at this year’s event was the Acts & Attractions tent which proved to be a popular addition. It hosted 15 entertainment providers and saw a great range of features, such as a serenading robot and Joseph’s Amazing Camels!

It certainly was a great two days and we were lucky enough to have been awarded our prize, which we are still very grateful for. It has actually made us more determined to come back and defend our title at The Showman’s Show 2015 and to bring more innovation and quality to the event! So we’ll see you there next year!